Saving Graces for the month of May.

For the month of may we at the Septekh administrative Staff give all of you the following mp3 for your enjoyment. “Saving Graces” (link now void).

I happen to know that the song had the working title “King Chromosome”. A name the old geezers in the band are keeping for a special future project. In the end however the lyrics of the song was totally rewritten and the King had to make way for his subjects, the Freaks and their perceptions of the masses.

I am permitted to inform the public that a music video for the song “Superheated Iron Core” is currently in postproduction. Below (pic by photographer Kamil Janowski) we see director Richard Jarnhed trying to remain focused in the creative chaos of another Studio 508 Production. Release date and complete credits will be posted in this forum on a later date.

All hail the great pig! 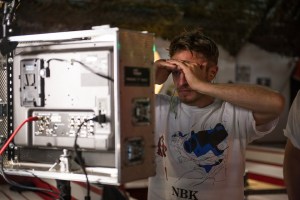 Something From Nothing Pt II; Going Down

Parched. Not forgotten but disregarded. Studiously overlooked. Dying. Thats when the flowering happens. When precious moisture and nourichment is furthest away.

Outside spring is coming. Chill and threateningly bright. In the kitchen of the 508 the windowsill is a desert. Man made desert. Controled. Manufactured. Owned.

I am cactae. I made this ledge where I’m standing. A flowering is comeing. A death. I’m going down. We’re all going down. But like the cactus I’m doing it in style.

These past weeks have been hectic at the Studio 508. Our gentlemen protagonists have kept us thoroughly busy. However proud of our achievements I am not at liberty to expand on the exact nature of our creation yet. The results of our efforts will in due time be made public in this forum.

The main reason for this post is to deliver the April download to all of you. I give you track no 2 from Plan for World Domination:

The March download link for “Into the Void of My Mind” is now void.

–  Void (law), something that has no legal effect.

–  Void (cards), to have no cards of a particular suit in one’s hand during a card game.

–  Void (boiling heat transfer), formed where there is a departure from nucleate boiling, causing a critical heat flux. Or you could just look it up your selves.

By order of my superiors I hereby convey the link for gratis download of an mp3 of the opening track from Plan for World Domination:

“Into the Void of My Mind” (link now void)

This link will remain active throughout the month of March.
And yes. Negotiations have succeeded. The full album will in time be made available. One track at the time. In April it will be Going Down in Style, in May, Saving graces etc. Until finally in March 2016 the 11 minute title track Plan for World Domination will be posted in this forum.

Greetings from The Staff

Written by The Staff on 18 February, 2015. Posted in Septekh

On behalf of the Septekh Staff I welcome you to this; The Septekh Blog.

Our job is to provide a sober, informed voice in this forum. To communicate rather than to confuse you poor readers with nonsense.

For a start I’d like to inform you, soberly, that this is still very much a site under construction. We at the Septekh Staff in collaboration with Studio 508 Productions and the wonderful Andreas Fogelqvist from People and Technology, plan to launch another three parts to the site in the up coming months. A heavy Discography page, a web-shop and a section on the 508. More detailed information will precede the release of each of these segments.

Secondly I’d like to add that for a full year following the publication of this site an mp3 from the Septekh discography will be made available for download, gratis, exclusively on this site through out each month. Starting in March 2015 with the opening track from Plan for World Domination, Into the Void of My Mind.

We are currently pushing the idea that the whole of the PFWD album would be a suitable gift for the Septekh fans out there. But the lads in the band have yet to see the potential in this.

We’ll keep at it.

Monsters are for the cage. The stage is a cage as good as any.

Well there we are.
This is a forum for my unfettered expandings and ravings.
My overturned box in a street corner. My sandwich board.

Et Voila: Let me expand on The Beast.
He came to us first in the form of a pressing weight. An animal presence in the back seat of Davids piece of shit car on the ride back from our first weekend in Erik Forsbergs underground sanctum. It was 2009 and we had recorded a DEMO. And for the first time we got to listen to what we really had been playing all along in that damp, moldy, dump of a rehearsal space. And there he was. Sitting behind us. Impossibly huge, warm. Menacing.

We’ve gotten to know him better over the years. As the great pig of our dreams. Sharing his blood. As flitting, feline shapes around the 508. Walking the boundaries. As specters in the dark with Krügeresque knifed fingers. Prodding us to go on. To proceed in the face of impossibility. And I keep expecting the fear to loose it’s edge. Familiarity to set in.
But it never does.
In the deep places he made us. Just as we have made him. Up here on the surface.
He is our guide. Our judge. Our teratoid traveling companion.
He is Septekh.

How is this possible?

Every time I turn around there is a new unique opportunity to fail. To surrender. To acquiesce. To conform. To die.

Always empty. Always full of nothing but words and promises and excuses and restlessness. Indeed a cage a bottle and a grave.

So how could I sacrifice this momentum? This gravity?

I could not. Will not. I can do no other thing with my time than deliver this same lesson over and over again. Until you can get it into your thick fucking skull that there is no peace. There is no relief. There is no escape and there is no closure.

Welcome! Nice to have you.